Metal-working companies who need to optimize their production look for a machine that can pre-bend and roll their metal efficiently to produce the products they in turn sell. We carry the MG line of rolling equipment; 4 roll hydraulic plate bending machines, 3 roll double pinch plate bending machines which both offer great benefits. We also have a 2 roll machine when extreme accuracy is required. The 4 roll machine offers great precision, productivity, versatility as well as speed, safety and ease of operation. For companies in the fabrication industry, they need top-quality machinery in order to maximize production and profits.

Please click the image to the left for the article. 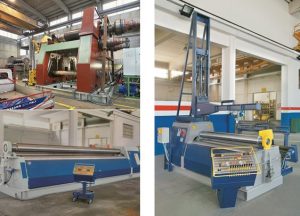 Four-roll technology has been around almost since the turn of the century: however, it was impractical, as the improved production did not justify the costs.

With the advances in Fluid Technology this has changed dramatically. It is now possible to buy a four-roll machine for very nearly the cost of a three-roll double pinch machine.

Is this an important development to plate roll users?  To answer this question, let’s briefly review the functions of the single initial pinch roll, double pinch roll and the basic pyramid roll.

A guillotine shear is a machine that can shear or cut various materials with a guillotine design. The word “guillotine” is associated with a blade that drops along a vertical track. This type of machine was primarily used in familiar history as a method of execution, particularly in the French Revolution, but the modern guillotine shear cutter is a tool used to form and shape products for a market.

The principles of the guillotine shear were incorporated into the design of metal shears and have been the primary design for all of these years. Some of the shortcomings of a guillotine shear are that it must run in gibs and ways and therefore need a certain amount of clearance which has a direct effect on the thinnest sheet than can be cut (see figure 1). 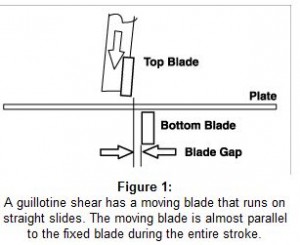 Also, the ram moves down with approximately 1 degree of backward motion. This allows the cut sheet to clear the back gauge and drop, although sometimes even this is not enough and the cut part is wedged between the lower blade and the back gauge.

When a guillotine shear has a throat it must be heavily re-enforced to avoid the deflection that would normally result from a deep throat.  The apron of the upper ram is heavily gusseted to keep the blades parallel to the bottom blades. This system has worked well for hundreds of years however times change and new engineering becomes available.

On a swing beam shear the ram moves on bearings so there is no play what so ever. This allows the swing beam shear to be able to cut paper as long as the blades are sharp. The ram moves from a fulcrum point in the rear of the side frames giving the shear a massive amount of plate between it and the cutting point (see figure 2). This means almost no detectable deflection. 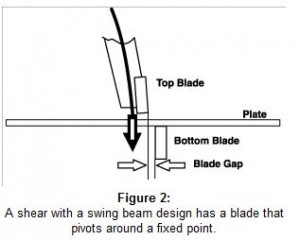 The back gauge is attached to the bottom of the cutting column and moves up as the blade goes down. This means there will never be a possibility for the material to become stuck between the blade and the back gauge.

Rather than gussets on the apron a swing beam shear wraps the entire ram as one solid gusset making it much stronger than a similarly gusseted ram. It can have a deep throat with no possibility of deflection and can cut even the thickest piece of metal with a very low rake angle.

In my opinion the swing beam shear reviewed the short comings of the guillotine shear and fixed them; however, it is important to remember that before making a decision on purchasing any kind of a shearing machine factors such as the type of shear, required capacity, productivity options, and safety should be carefully evaluated.

One important consideration used in deciding what shear is the right one for any job is the capacity required to perform the job. Most of the shears on the market today list capacities for mild steel and stainless steel. It is advised to compare a fabricator’s requirements to those of the actual machine.

Some shear capacities are rated on mild steel, which may have 60,000 pounds per square inch (PSI) tensile strength, while others are rated for A-36 steel or 80,000 PSI tensile strength. Capacities for stainless steel are almost always less than those for mild or A-36 steel. Surprisingly enough certain grades of aluminum require as much power to shear steel does. As always, when making a decision on any kind of metalworking machinery purchase, it is important to work with a reputable and knowledgeable company that can answer all the questions regarding the performance and capacity for the machine.

Save time and money. Steel used to reinforce concrete is known as rebar. It is usually made from carbon steel and the ridges on its surface are there to reinforce the anchoring into the concrete as well as help balancing the load between concrete and steel. Together, rebar and concrete, prevent the concrete from collapsing. A devastating example of incorrect usage of rebar is the 8.1 magnitude earthquake that struck Mexico City in 1985 leaving the capital in crumbles and killing thousands of people; most of the collapsed buildings’ rebar was either entirely too frail and thin to support the building—if the building had rebar at all.

Rebar is measured in fractions of 1/8 increments; it is available in different grades and ranges from #3 rebar up to #18 rebar. The grade designation is equal to the minimum yield strength of the bar. For example grade 40 rebar has minimum yield strength of 40 ksi, grade 60 has a minimum of 60 ksi, and grade 75 has a minimum of 75 ksi. The most common rebar used in concrete construction is grade 60; grade 75 is used in bridges and other heavy-duty construction and grade 40 can be found in low-stress concrete constructions such as sidewalks. 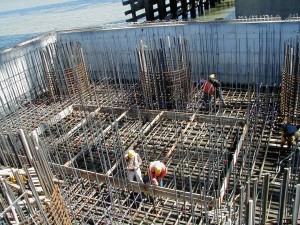 Picture to left: Building of Zampa-Memorial-Suspension-Bridge in California

Rebar comes most commonly in 20′  long sticks, thus there is a need for machines to cut and form them so they fit the purpose they will be used for. Concrete contractors do not have many choices when they have to cut or bend rebar, no matter the thickness of the bar:

Both options above will get the job done, however, as the critical thing in today’s competitive world is to get the job done fast – save time – and to get it done as cost effectively as possible – save money – it is recommendable to own your machines instead of outsourcing the work. For large, detailed jobs it makes more sense to order the specific rebar from a fabricator; however for smaller jobs, owning a cutter and/or bender gets the job done faster. 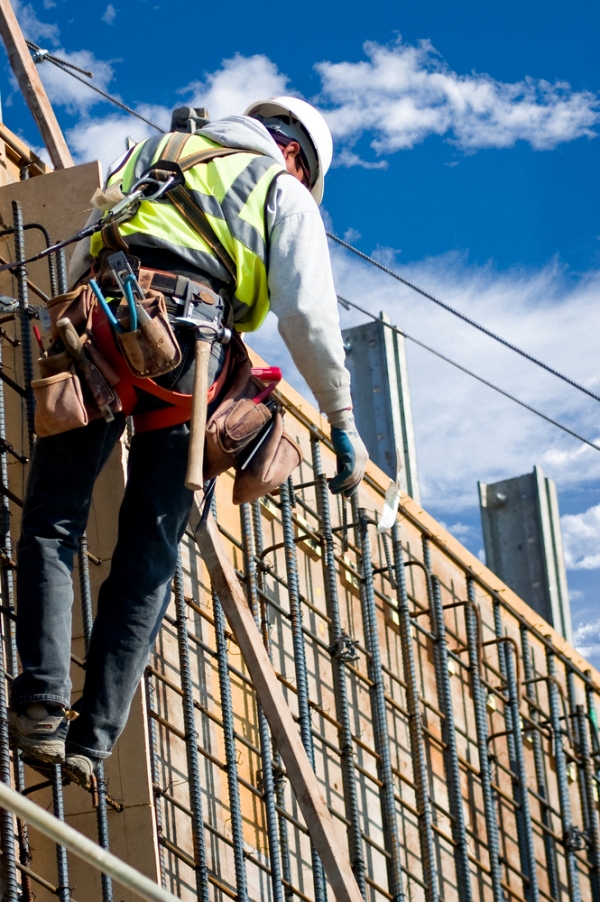 Using a rebar cutting/bending machine instead of a manual tool, in addition to making the work itself much easier, you will be able to cut 3 to 4 times more rebar which of course affects productivity positively. Another thing that speaks for the rebar/cutting machine is that they make it possible to make numerous identical pieces.

The entry-level price for rebar cutters and benders is not high. They run on electric power, either from wall sockets or generators. Also, the maintenance is easy, the blades last a long time and the machines are reliable and relatively easily to repair if needed.

As each job is unique it is very important to work with a good supplier in order to ensure that correct equipment is selected. 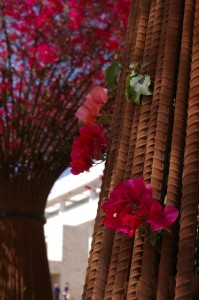 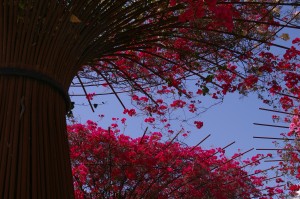 Special alloy rolls are necessary when there is a need to roll a relatively tight diameter on a machine where the standard roll is too large. The question is, however, should you really choose a special alloy roll or should you consider an option that gives you the benefits of the alloy roll but doesn’t limit the usage of your machine?

For an example, a 10’ X 3/8” roll should be used with a 10” roll diameter. Let’s say a person is looking for a roll of this size but has a requirement of rolling 13” diameters. He would have to by a smaller machine unless the power requirements called for the 10’ X 3/8” and in that case he would need a machine with a reduced diameter top roll. This roll would have to be a special alloy roll because it would be smaller yet still being able to do the work of a roll with more mass.

Once you have made the decision to use a smaller special alloy roll you have turned your machine into a very narrow usage machine. A special alloy roll can take more deflection without taking a set (warping) and still go back to it original position. However, a special allow roll still has the same characteristics as any other roll. If it has less mass it will deflect more. So, having a smaller roll – even a special alloy roll – will mean you cannot do the range of work you could with the standard diameter roll. You will have severe barrel defects if you work anything beyond the mid-range of the machine. For this reason it is always better to bring the most massive roll to what ever job you are doing.

Example: a MG plate roll and a competitor’s plate roll; both with 10” diameter top rolls.

If a job requires a 13” diameter the competit 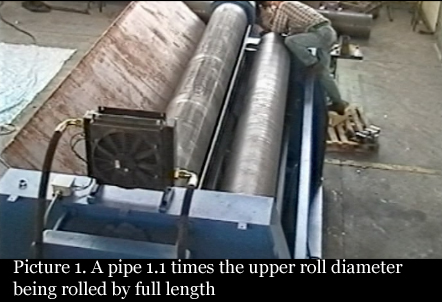 or would have to quote a smaller machine or a 10’ X 3/8” machine with a smaller special alloy roll. MG roll, however, would be able to roll the part with no problem even if the job called out for an 11” diameter. It does this with the full 10” diameter without having to reduce the roll to an 8.6” diameter and reducing the effectiveness of the roll. 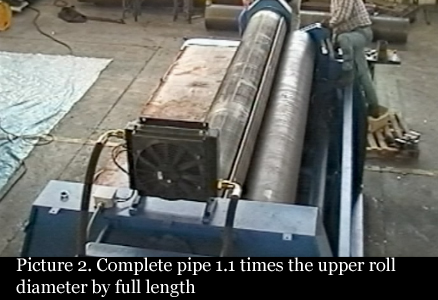 The reason why MG rolls can work up to 1.1 times the top roll diameter is their exclusive geometry. It is not a matter of power at all. In fact, MG’s geometry allows it to use less power for any given job making it the most energy-efficient roll on the market. MG rolls also use less horse power than the competitor.

If you are looking for a bigger machine to make a smaller diameter you can always choose a special alloy roll; however, if you want to get a smaller diameter part without sacrificing a broader range of rolling, your best choice is the MG roll.