In doing a little research in the metal fabrication, machinery, sheet metal, rebar, etc, industry, I came across a tower that, in my opinion, is WAY more interesting that the leaning  tower of Pisa.

It is the Leaning Tower of Nevyansk, in Russia. 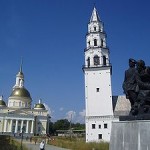 As opposed to the Pisa tower, which was built in stages as almost an afterthought due to war, the Nevyansk tower was intentional.  But what the actual intention was is a mystery.

First and foremost, what brought this tower to my attention is that fact that it is acknowledged as the first known use of rebar in modern concrete construction some 150 years before rebar was “invented”. 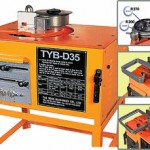 In the metal fabrication machinery business, we are aware that metal fabrication itself predates history.  With technology the tools we have available to us have changed as well.  The youngest of the line would be rebar benders like our TYB-D35 General Bender.

I say the youngest because, historically speaking, rebar is the youngest.  Invented in 1849 by Joseph Monier, reinforced concrete was actually patented by him in 1867.  Now considering that metal fabrication as a general subject predates history, 1849 is pretty darn young.

Yet, the Tower of Nevyansk was built somewhere between 1725 and 1732 according to Russian historians.  That in itself is noteworthy, but not what really grabbed my attention.

Unlike Pisa, it is believed by some historians that the Nevyansk tower was constructed leaning on purpose.  Its face leans toward the builders home town as if paying homage.  Of course scientists say that legend is preposterous and that the ground shifted during construction.

I believe that the first is more plausible actually and here is why.  The rebar that runs through the entire carcass of the building, internally and externally, runs from the lightening rod on top of the tented roof into the ground.  Obvious to me, the rebar was intentional from the beginning.

If the rebar was fabricated and installed after a ground shift, it would be evident as an addition and would only be part of the internal wall reinforcement from the point of discovery up.  What do you think?  Plausible rebar theory?

Another factor regarding this building that makes it more interesting is that the inner part of the tented roof is the first cast iron dome in history.

If that weren’t enough, the rebar lightening rod is the first in history as well some 25 years before Benjamin Franklin!

But that’s not all.  The most interesting thing of all is the buildings purpose, or purposes I should say.

Each floor of the 9 floors housed a specific and even mysterious purpose it seems.

The first, because of the shackles, is considered to be the place of some ‘mysterious work’ performed by enslaved serfs.  The second is considered to be an office due to documents found.  The third was some kind of laboratory with a furnace.  There is a legend that the owner Akinfiy Dimidov smelted coins there due to the silver and gold traces found in soot samples.  The fourth, fifth, and sixth floors are simply stairwells while the seventh and eighth floors are dedicated to a clock and bell.  The clock itself cost more than the entire construction of the tower.

The ninth floor is an observation tower.  But still that is not the end.

Between the fourth and fifth floor there is a small 20 square meter room that is an acoustic marvel.  Two people standing in opposite corners of the room can whisper and be heard by each other as if they were standing lips to ear.  Intentional construction?  Purely accident?  Who knows, but it is very interesting.

So here we have a tower that is the first known use of rebar using the latest metal fabrication techniques and machinery known to man in the 18th century that historically holds the trophy for several ‘firsts’ with multiple mysterious purposes that also leans?