“Back when I was your age…” is a phrase that is practically a cliché today.  But it fits here.

In today’s age of advanced metal fabrication we take for granted the tools and machines that we have at our disposal.  If our fabrication peers of the past, say the 20’s and 30’s

could somehow see our MG Angle Roll, Plate Roll, and Press Brakes, they would probably look upon them with awe and envy.

Although the machinists, metal fabricators, and construction foreman of the past would look upon our machines today as nothing short of a miracle, they could pull off miracles of their own.

Take for example the race for the tallest building of 1929 between Walter Chrysler and H. Craig Severance.

In 1929 both men were racing to complete the tallest building in the world at the time.  Severance was so convinced that he and his colleagues had won the race with their 40 Wall Street monster, aka the Bank of Manhattan, aka Trump Tower, that before the interior was even finished he held a major downtown elite ceremony claiming the prize.  Originally 808 feet, Severance added a 60 foot steel cap to reach 925 feet and then celebrated with the crème de la crème.

“The World’s Tallest Building Raises the Stars and Stripes to the New York heavens!” read the headlines.

Unfortunately their record held for a short two weeks.

Unbeknownst to Severance, within the walls of Chryslers neighboring building, 27 ton, 186 foot steel sheet metal masterpiece called “The Spire”.  It was comprise of 4 sections that were clandestinely constructed within the walls of the unfinished building.   And on October 23, 1929 the first piece was lowered in place.  Afterward, the remaining pieces were hoisted and riveted into place.

Besides the constructing the spire with the best metal fabrication machinery available at the time right under Severance’s nose without his knowledge, what else makes this a miracle?  The entire process of installing the 186 foot 27 ton sheet metal sculpture on top of the 66th floor of the Chrysler Building only took an amazing 90 minutes to complete. 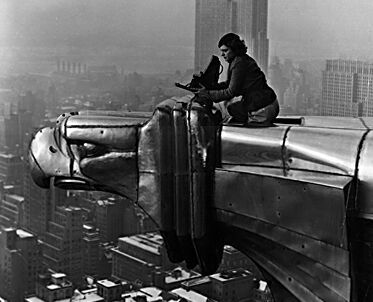 So, although we here at C. Marshall Fabrication Machinery, Inc. have the machines that would seem like marvels of science fiction to grandpa and his fellow workers, there is credence to his words when he says “Back when I was your age…”