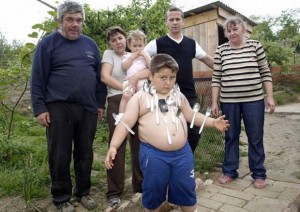 It must be something in the cyberspace ether, but two weeks after I wrote my last blog article on “Magnetic Boy”, our not-so-little friend from Croatia seems to be creating a new internet sensation. Thanks perhaps to the fact the he’s now a few years older and his body mass has increased as well, to disproportionately high levels in fact, “Magnetic Boy”is now said to be able to get up to 25 kilos of metal to stick to him at any given time. Do a quick Google search and in short order you will find an epic recent photo of him wearing a household iron on his bare chest, which I can only hope wasn’t on at the time. I bet he’s really good at finding the car keys as well.

There are also sites and medical experts stepping up to the plate to dismiss him as a fake. What is interesting is they aren’t disputing the claim that metal objects can stick to this kid. They aren’t saying that any of the photos or videos circulating of him are doctored or photo-shopped. Nevertheless, they are claiming that for the past three years, his parents have been part of a long-term scheme to sell him out as a circus freak. (On this note, I’m including a photo in this article of him with his family. They look like real city slickers, don’t they? The kind that would definitely have it in them to create a long-term hoax that is sweeping the cyberworld by storm. Real snake-oil salesmen, the lot of them).

To reiterate, none of the “experts” who are weighing in on Magnetic Boy are stating that any of his magnetic powers are fake. Instead, they are claiming that ANY human is capable of sticking metal objects to their body. According to the naysayers, any human can place a metal object onto a part of their body which is smooth and hairless and get it to stick there. A Facebook group called “We are all Magneto Boy” shows photos of different people doing just that. Apparently it is just as simple as taking a metal object and placing it against a smooth and hairless part of your own body.

Meanwhile, back at the ranch in Croatia, Magnetic Boy’s repertoire of superhuman powers has now also expanded to include the power to heal by touch, which is also being attributed to his magical magnetic properties. According to his own grandpa, Magnetic Boy cured his stomachache simply by placing his hands on his stomach. According to his grandpa, Magnetic Boy’s hands emitted a powerful heat and his stomachache was cured. I am definitely willing to concede that grandpa did not have an entirely unbiased point of view, and that his own strong belief that his grandson had the power to heal him may have been enough to do just that.

With that said, I hope that by now I have given you personally enough time to try to stick some metal onto your body.

If you haven’t already tried to do so by now, then I am frankly surprised and a little bit disappointed. I admit that as soon as I read the claim that any human can do this, I grabbed the next available metal object – in this case, a fork – and tried to glue it to my face. And just to provide a bit more context, I happened to be sitting in a very pretty little waterfront tapas restaurant at the time. Luckily for me, I was already a paying customer by then, so the proprietor didn’t ask me to leave when he saw me do so.

However, I assume that if you are reading this, you are somehow already involved in the metal industry and you make a habit of surrounding yourself with large metal objects on a regular basis.

So rather than tell you if it worked or not, I will instead leave you with a (rhetorical) question: in your daily business operations, have you noticed a propensity in yourself to bring your work home with you – literally? Do you regularly find yourself peeling large oil tanks or ship hulls or snow plows or giant steel cylinders off your chest on your drive home from work?

I didn’t think so.

Although I can’t speak for all y’all, Magnetic Boy still has my vote. And until I figure out a way to stick a fork to my face that doesn’t actually involve stabbing myself with it, he will continue to have my vote.

And, if this article inspired you to actually try sticking a metal object to your body, I would REALLY appreciate it (if only to satisfy my own curiosity) if you left a comment that informed us all of the results.